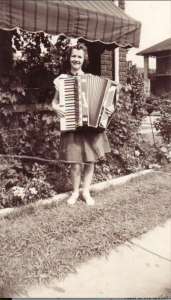 Margaret Frances Ketcher (1923-2006) was very musical all her life. She is pictured here at about 16 years old with her accordion. She also played the flute and later in her life, the Hammond Chord Organ.
Margaret loved being the center of attention and would have loved to have had a musical or theatrical career. During her teenage years, Margaret auditioned for amateur talent shows that came to the Little Rock, Arkansas, area. She also played her accordion on a local radio show.

Shortly after this picture was taken, in 1940, Margaret married Joe W. Lucas, and began a family. Her musical interests became her leisure time hobbies. She was a successful business woman and traveled extensively including the Middle East, Europe, Mexico, and South America.

Margaret was a trendsetter, as few women took up the accordion, and she owned her own business with a girlfriend from high school, at a time when most women were homemakers.